The Encyclopedia of Arda lives up to its name. This website has literally put every aspect of Arda and it's tales in alphabetical order. From races, places, flora and fauna this amazing collection of information makes it so easy to follow from all, accept for the most earlier works (due to the many inconsistencies), of Tolkien's writings regarding Middle-earth with ease.

Also included are songs, time lines and calendars. Where else could you find out quickly how long an Ent-stride was.

As the Ents travelled through Fangorn Forest, they measured the distances they travelled not in yards and miles, but in Ent-strides. The exact distance of an Ent-stride is never specified in detail, but what notes we have suggest that a single stride for Treebeard would cover approximately four feet (about 1.2m). By that approximate calculation, one mile would be equivalent to 1,320 of his Ent-strides. However, since the Ents seem to have been of varying sizes, it would seem that Ent-strides must also have varied in length from Ent to Ent.

The are only two known distances given in Ent-strides, and one of those is rather vague. The first is Treebeard's stated distance between the hill where he first encountered Merry and Pippin, and his Ent-house at Wellinghall. This journey took seventy thousand Ent-strides, corresponding to just over fifty miles. Later Pippin tried to count the Treebeard's Ent-strides as he travelled to Entmoot, but only managed to reach about three thousand: in other words, he lost count after a journey of less than two and a half miles.

One can spend hours roaming around it's pages from link to link to link. It is a vast amount of work to roam through but very easy to use.

Encyclopedia of Arda
Posted by Lynn-Marie Gildersleeve at 7:35 PM 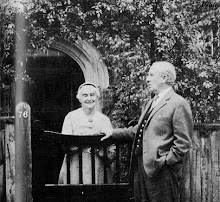 How to search this blog

If you would like to use the "Search" function please be aware it only will search for a site name. If you wish to find particular subject matter please use the tag cloud above.

Tokien fans are the best!